This week I visited the newly finished addition to the Royal Melbourne Institute of Technology’s Swanston Academic Building (Building 80), to see for myself the latest offering from Lyons Architecture.  Lyons was formed in 1996 and has cemented itself as one of Melbourne’s leading firms in terms of recognition and respect within the industry. Building 80, I am pleased to report, will only add to this reputation. (For another Lyons project see The Melbourne Brain Centre featured in last month’s Melbourne Open House post)

RMIT has a history of building eye catching and controversial architecture at its Melbourne City Campus. In 1993 Building 8 by architects Edmond and Corrigan Pty Ltd. This building was the first sledgehammer against the previously banal Swanston Street city wall. This building is unashamedly loud and non-conforming to the social norm. (For me this building personifies the slightly nerdy uni student with an Atari 2600 tee shirt and bright orange hair). 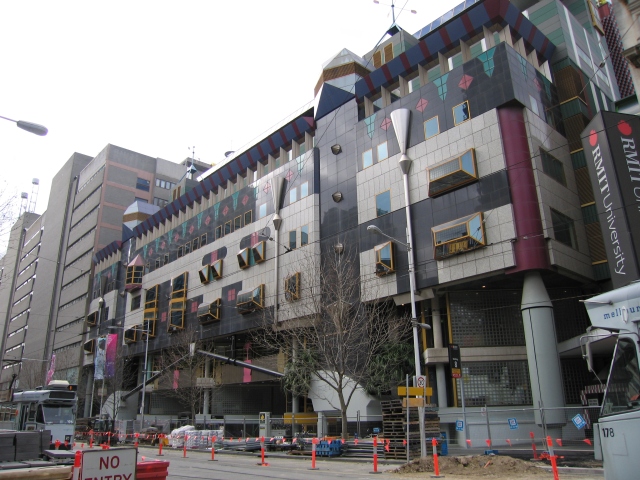 Three years after Building 8 came the major renovation at storey hall. The folklore goes that this building literally stopped the traffic by causing rubbernecking drivers to have car accidents. Designed by Ashton Raggat McDougall, the refurbished section of Storey Hall uses the geometry of a Penrose tile pattern combined with florescent green tones and robust concrete to present a collage facade, which screams for attention. If this building were a university student it would likely be the hippie ‘free spirited’ type with ADHD.

So it is with this precedent that Lyons Architecture designed building 80 on the opposite side of Swanston Street. 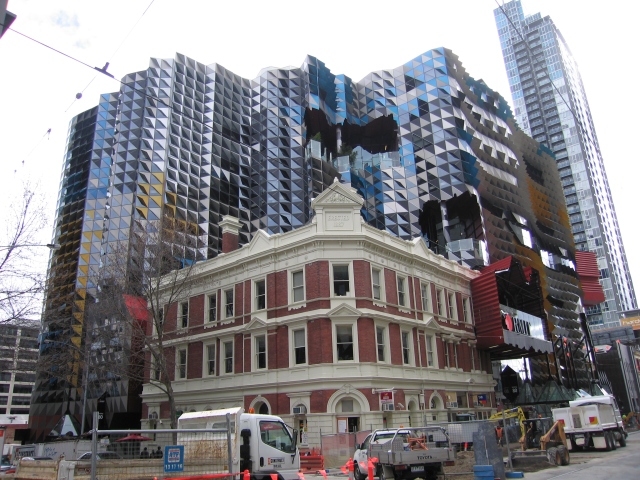 The first thing you notice about this building is the striking multicoloured geometric  facade which features on all sides of the building. The triangular geometry allows the building to wrap like a curtain backdrop behind the heritage hotel on the corner of Swanston and  A’Beckett Street. It is also this triangular theme that provides the basis for the architecture throughout the building. From a functional viewpoint, the facade provides its own unique views outward whilst providing shading to limit the unwanted heat gained from direct sunlight. En masse these triangular windows and sun shades provide the bold and colourful identity which connects with the RMIT architectural branding. 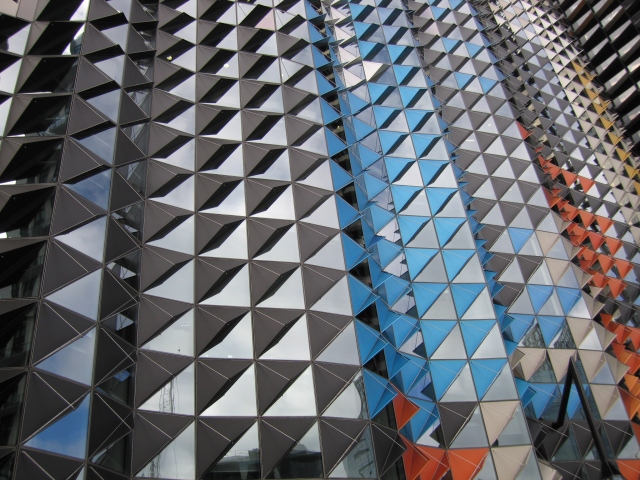 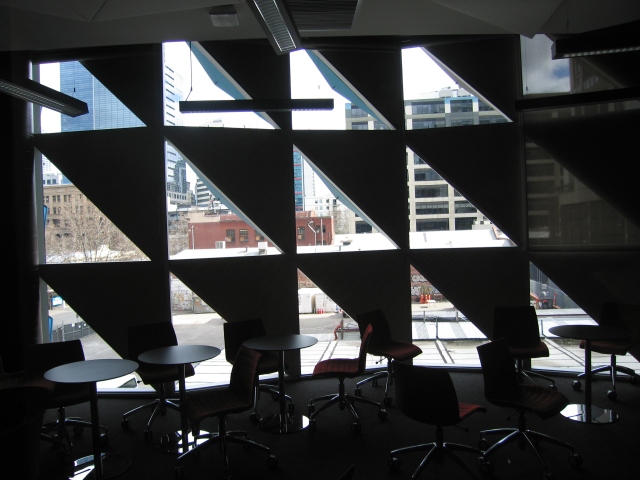 The facade from the inside

As a contemporary building, structural firmness is a given, however what will make this building last the test of time is the sustainability ideas imbedded within the design.

The building has many of the environmental sustainability credentials one would expect to see in such a building. These features include the high-performance façade with double glazing and sunshades, rainwater collection and grey-water recycling, a commercial solar hot water system, a natural ventilation system and energy efficient lighting and escalators. So in this regard they receive a big tick.

Sustainability in the broader sense must also consider how this building will adapt in time to future needs and potential changes in use. Whilst this is hard to predict, the most likely protagonist of this change is the effect that Information technology is having on higher education. There are some who believe an online university model will overtake the need for physical university buildings. How likely this scenario is remains to be seen. What is known is that an investment like this by RMIT in a physical building says much about where they see the future of higher education and their university.

Building 80 comprises an impressive array of facilities which amount to a virtual urban oasis for any university student.

Housed within this building are:

What I found most impressive about this array of learning and studying spaces was the variety in type of space available. There is certainly no one size fits all approach here. Options for study space include indoors or outdoors, large space or intimate space, formal desks or informal lounges and virtually everything between. This variety will ensure that individual students can work in conditions which suit their individual circumstances. 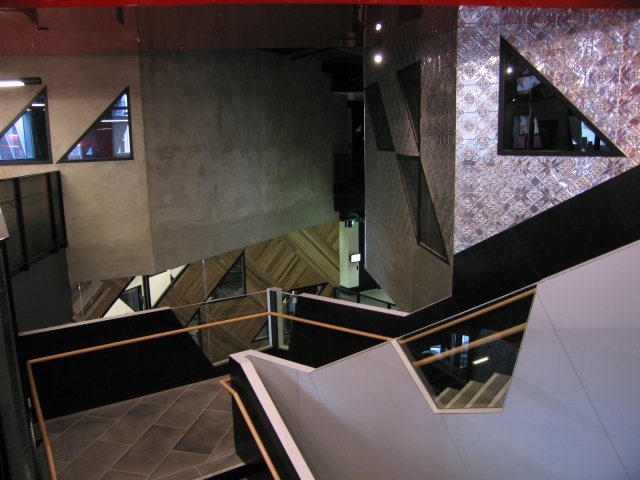 Another aspect to commodity which was done particularly well in Building 80 was the way finding and signage. The digital information displays worked seamlessly to provide a variety of information effectively without dominating the spaces. The signage for the elevators and the amenities is clever in a way which is best conveyed via the photographs.

This building to me is delightful in a way that Storey Hall and Building 8 are not. Whilst both Building 8 and Storey Hall are successful in pushing boundaries and having architectural merit, neither would I describe as being beautiful. Building 80 however has a rich quality to it which resonates in a way I can only describe as such.

To create a beautiful building which has such vibrant colour is often a very tricky thing. Often it appears garish, tacky or cheap. In this case, however, it is refined and well considered. The architectural concept first encountered in the triangular facade, translates seamlessly into the interiors which are bright and vibrant. 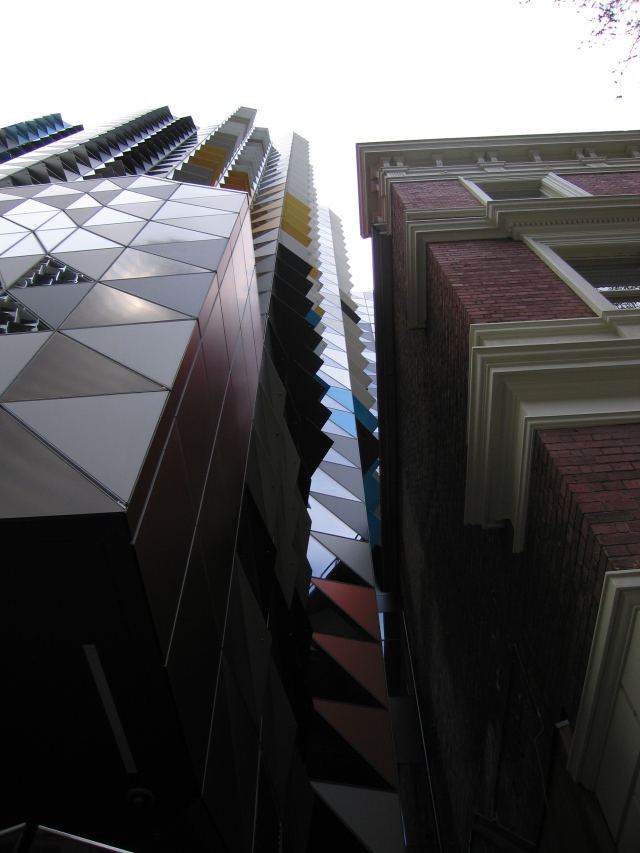 This piece of Architecture is a remarkable and stimulating experience. If you get the opportunity, it is well worth the time to have a wander of the corridors.   If Building 80 were a university student it would be that annoying all rounder type, which is both smart and attractive. So watch out for it in next year’s Victorian Architecture Awards, as it is a high achiever and is not likely to accept second place.

Architecture is for everyone

Any resemblance to actual university students, past or present is entirely accidental