Journey into the Shine Dome

Every year for the last few years I have had the opportunity to attend a lecture at the Shine Dome at the Australian National University in Canberra. The lectures themselves are on high level university mathematics and largely go beyond my level of understanding. However the brilliance of the building itself always makes the visit one to look forward to. 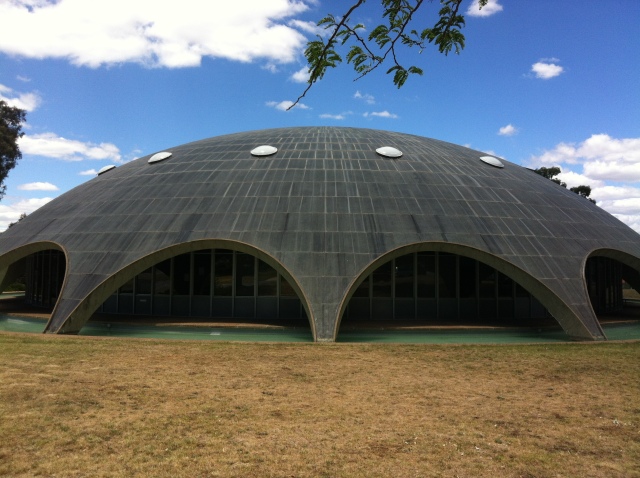 This building is the home of the Australian Academy of Science. The Academy is made up of around 450 of Australia’s top scientists. The members are all people who have made a significant contribution to advancing the state of human knowledge. This is a building where Australia’s best minds come together to share their research and discuss their ideas.

Entry to the Martian Embasy

The Shine Dome is of great importance to Australian Architectural history.  It was designed by Sir Roy Grounds (of Grounds, Romberg and Boyd) in the late 1950’s and was completed in 1959. Remarkably of all the nationally important buildings in Canberra this was the first to be included on the National Heritage List. It is also one of seven projects that the Royal Australian Institute of Architects nominated to a world register of significant twentieth century Architecture.

The justification for these accolades rests in the clarity of the design concept and the technically innovative construction. From the exterior the single iconic dome appears elegantly out of the ground separated only by a moat of rippling water. An array of copper roof shingles compliments the grassed surrounds beautifully leaving the form to make the key statement. The structure underneath the copper roof is remarkable in itself.  The shallow concrete is just 75mm thick and was the first dome of its kind anywhere in the world to be built with circular cut outs at its base.

Moving over the footbridge one enters a lobby space which in turn leads to a curved corridor on either side. The space feels quite homely, with familiar textures and earthy tones. The architect’s intentions for a low maintenance building extend to the smooth jointed internal brickwork, which was specifically chosen by Grounds such that it would not gather dust.

Curved Corridors within the Shine Dome

The pinnacle of this building is the spectacular auditorium which is located centrally within the dome. As well as being perfectly engineered for the acoustics of lectures and speech, the space gives a feeling of formality, elegance and importance. By grouping the seating into pods of two, the space feels more personal to members of the audience. This feeling is enhanced by generous and comfortable proportions and craftsmanship. The ceiling above is nothing short of spectacular. Philip Goad sums it up best, “The ceiling was thus like a dreamy galaxy with limpid pools of soft white, a magnified Milky Way, dotted with stars that were lights and an encircling rim of concealed lighting, like an horizon at dusk, with the scientist as the dais illuminated like master druids before their assembled flock.” 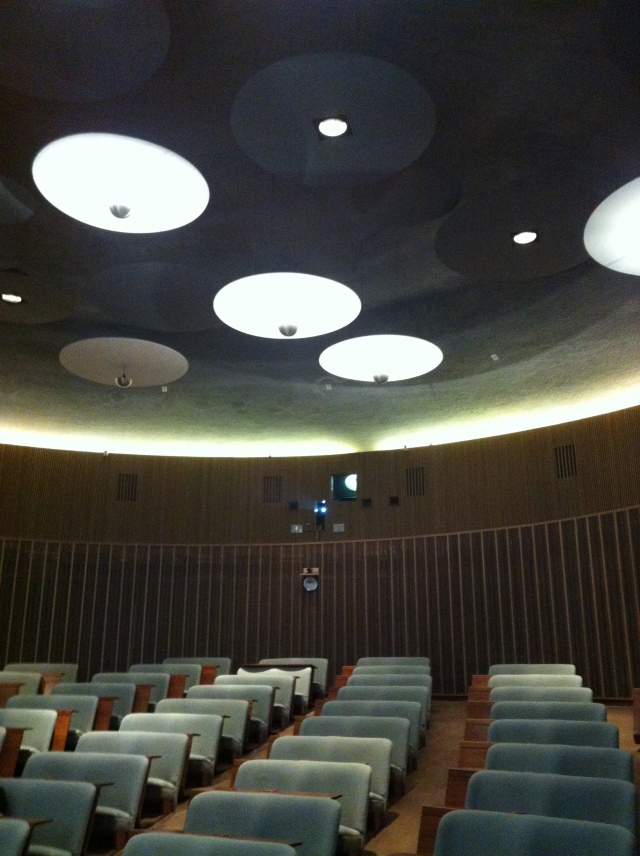 The original acoustic design for the Shine Dome included batons set at specific positions. These positions led to an uncomfortable visual illusion of motion which was disturbing to users of the auditorium.  As a solution, string has been added between the batons to provide a sense of greater solidity, without affecting the overall acoustics. 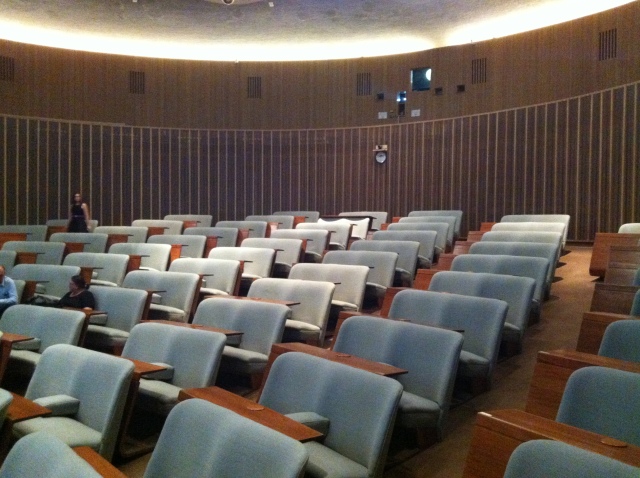