The final day of the conference was welcomed by an overnight electrical storm and heavy downpour of Melbourne rain. With the previous day’s presentations still fresh in mind, the day began with very high expectations. It did not disappoint. 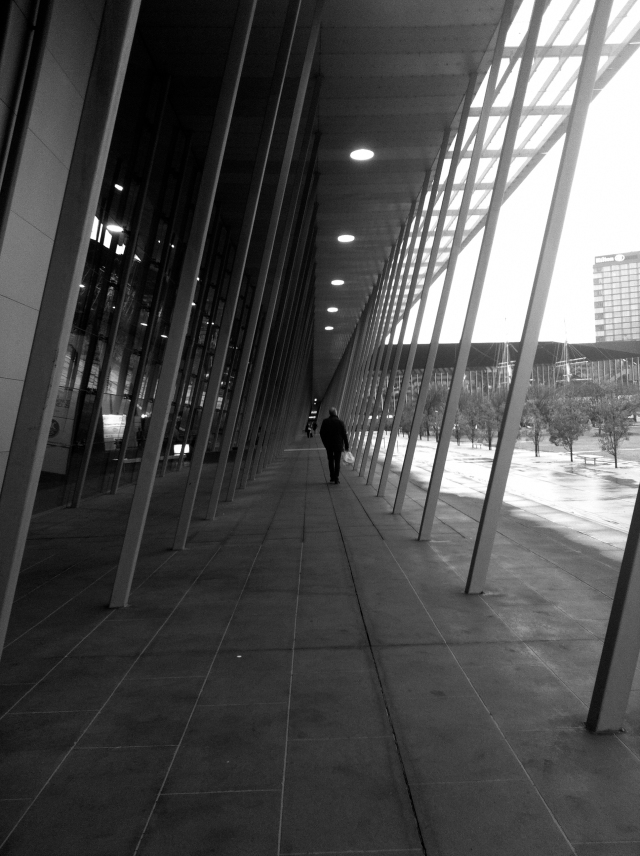 Kathrin Aste, co-founder of from Austrian based firm LAAC Architects was the first presentation of the day. Her first project was an elegantly shaped steel viewing platform on a remote and exposed mountain location. The result was a very well executed project which utilized laser technologies to map the extreme terrain and helicopters to overcome the access issues during construction 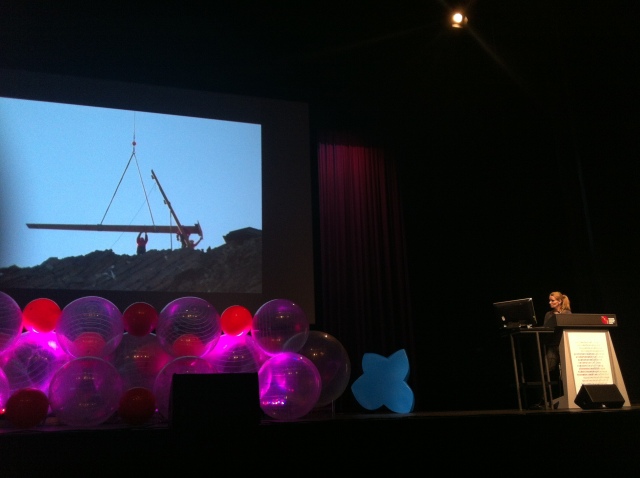 Aste’s second project was a masterclass in the use of organically sculptural concrete to form a public space. The outcome of this project was a space which was actively engaged by skateboarders, children and the wider community. It was refreshing to see this project come to fruition without the apparent battles with red tape and governance issues that seem to occur all to often when a space could be used for skateboarding or similar activities. 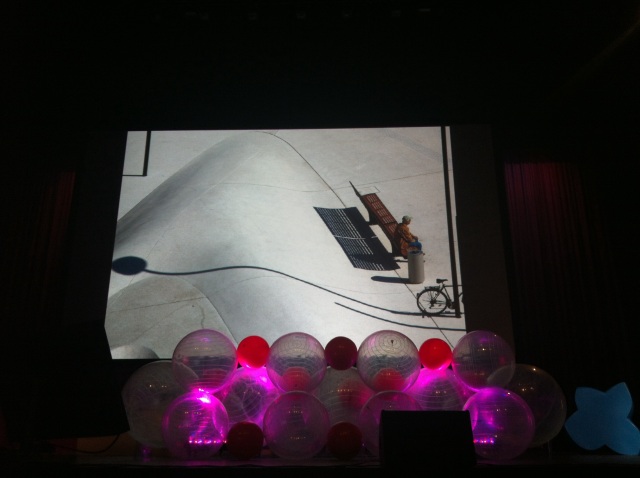 Next to the stage was Virginia San Fratello, who’s presentation was a clear highlight of the day and of the conference. The multifaceted talk started with her work with straw as a building material. This progressed to a socially engaged project which used the (paid for) signs made by homeless people to create an art object which spoke to the heart. 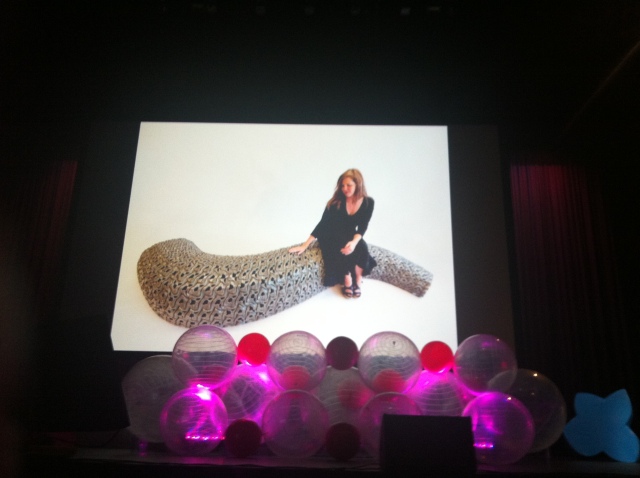 The presentation then took a different direction into an exploration of 3d printing as a method for generating architecture. What was explained was a trial and error process that began from ‘hacking the machine’ to feed it combinations of other raw materials to see what the outcome could be. This experimentation resulted in some materials that were stronger than standard concrete, some that were artistically soft and fuzzy and all that were substantially cheaper than using the proprietary ingredients 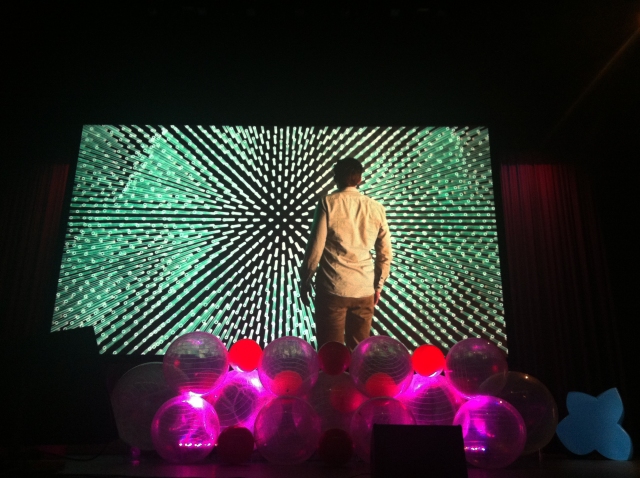 The high point of San Fratello’s presentation and possibly the conference was an art installation at Berkley Botantical Gardens entitled the SOL Grotto. This project was constructed out of up-cycled glass tubes from the failed solar technology company Solyndra.  To best explain brilliance of this project check out this short Video 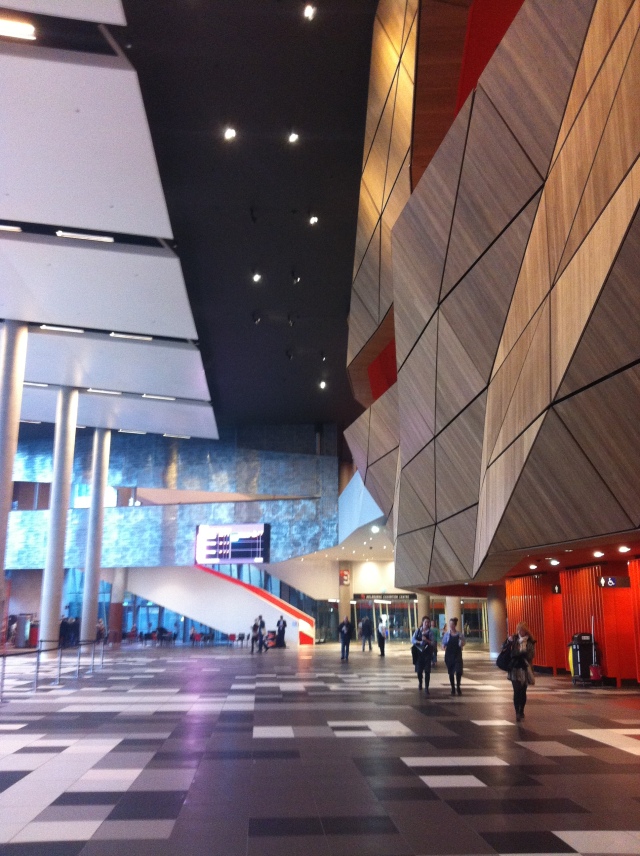 Inside the convention centre

Next to the stage was Philippe Rahm who presented a deeply technical presentation on a variety of scientific investigations such as humidity, air movement and the effect of light and colour on the human body. This progressed into specific interventions in a tropical Asian parkland to create more comfortable outdoor spaces. Unfortunately this presentation lacked the polish of many of the others, which left some of the audience disengaged.

After  the lunch break Tim Greer took to the stage to present some of his firm’s work in Sydney. The focus of this work was adaptive reuse of heritage structures. A highlight was his work on the Paddington Reservoir Garden which was an underground 19th century water reservoir. The expectation at the time was that a new platform would be built over the collapsed atrium, however the decision was taken to engage with this heritage structure instead. Greer’s presentation was very well spoken and easy to read with a stream of project photos enabling the audience to get a good understanding of the projects.

Jorge Otero-Pailos used his presentation to challenge the audience on the idea of air pollution as a material. After discussing the effect of air pollution on cities and buildings, the   discussion progressed  to an interactive component where scent samples were distributed to the audience. Each sample was a manufactured scent of what the Johnston House would have smelt like throughout various decades. I must say, three different versions of repulsive was all that I took from the experience.

The last speaker was Matthias Kohler who presented both projects and processes in a very thought provoking and futuristic presentation. To begin with Kohler dazzled the audience with what he termed the world’s largest time piece, a sublime Christmas light installation in Zurich spanning over kilometre. 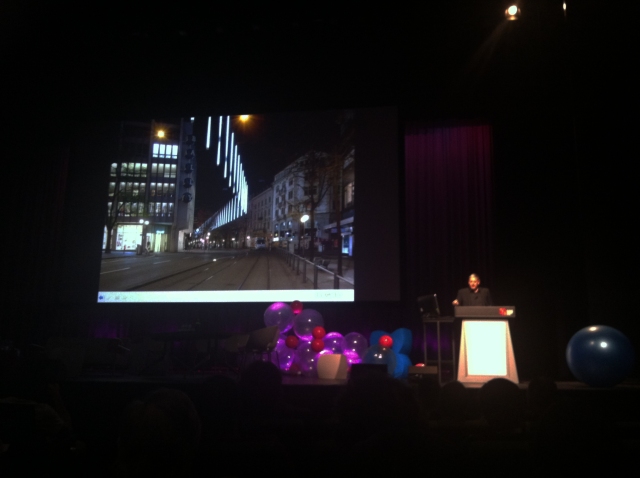 The talk then progressed into his work with robots to perform construction tasks such as timber routing, brick laying and the automatic positioning of steel components. 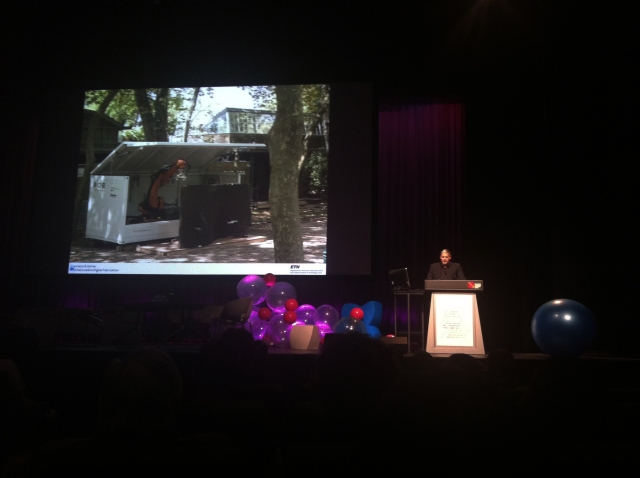 “We are not going go into the architectural details, because you want to see flying robots”

Matthias Kohler wowing the audience with a structure built by drones

To see the drones in action check out this video

At the completion of Kohler’s slightly extended talk, all speakers made it back up to the stage for a wrapping up session hosted by Nader Tehrani. It must be said this session was not as successful as it might have been. Throughout the conference delegates had been requested to SMS or tweet questions for this session. These questions consequently became far too numerous to deal with and despite them appearing on the screen behind the speakers, they were largely ignored. What was also unsettling was the insistence of Tehrani that the speakers should be drinking whisky whilst discussing his complex line of questioning. It was an unfortunate ending to an otherwise stellar event. 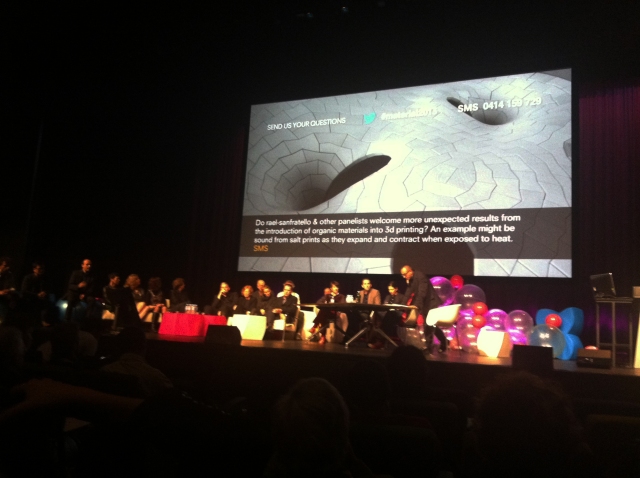 The final wrap up 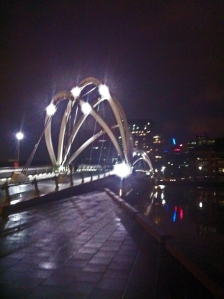 Many thanks and congratulations must go to the creative directors of the event  Sandra Kaji-O’Grady and John de Manincor for organizing such a thought provoking conference.