We all have a daily involvement with our built environment. Some see their city as something which is fixed in design and should not, or cannot change. Others take the view that we should have greater ability to adapt, modify and improve our surrounds. Evidence of this can be found in the rise and success of street art culture which reflects this desire to react to the built environment and become a personal agent for change.

City building, infrastructure planning and urban design have traditionally been a top down approach where the government or large corporation imposes their design down upon the community to embrace. This can be quite successful, particularly when there is a structured meaningful community consultation process informing a high quality design. However all too often, this consultation is inadequate and reduced to an authority promoting the fixed and final proposal. This disrespect results in a mismatch between the will and desires of the community and that of the powerful governments and financial stakeholders. As seen by the recent East West link protests, there is a genuine desire for the community to be very actively involved in decisions shaping their city.

While the public do shape the environment in small ways – by creating signage, planting gardens, or by simply occupying space – ‘ordinary’ citizens are at a disadvantage when it comes to influencing the larger forces of urban strategy, zoning regulations or infrastructure.

Can the design process go the other way, from community to the government? Recently two emerging architecture firms released details of pro bono collaborations with local community groups in Melbourne in a model which proposes just that. By pairing the Architect’s skill set and abilities directly with the goals, desires and knowledge of the community, it gives the citizens a much stronger voice and tilts the city shaping balance of power slightly closer to an even footing.

The first example of this pro-active approach is project entitled ‘Streets Without Cars’ by Mihaly Slocombe Architects. This project re-imagines a 120 metre stretch of an inner suburban Melbourne street, reorganising the space to prioritise pedestrian movement above that of cars.

The process began with detailed and genuine community discussion and consultation which importantly will continue through the life of the project via meeting and a dedicated website. From this starting point of understanding, the architects developed the project into an exciting scheme capable of acting as a backyard for everyone in the street. By achieving community ‘buy in’ there is no doubt that should the project go ahead it will create a greater sense of community amongst the residents.

The urban intervention itself includes community space for a number of uses. For entertaining and socialisation there is a Kitchen and BBQ area whilst for the youngest residents there is a play room and a sand pit. There is also the intention for the community space to be able to produce food by including a mini orchard and vegetable patch.

From a transport perspective early the intention was to remove cars completely from the street. This objective was later revised through the community consultation process such that vehicles could still traverse the street but at a slower speed, making it less desirable for through traffic.   Through design, the priority has been given to pedestrian and bicycle traffic. To encourage this further 96 undercover bicycle spaces have been provided for the residents to use. Despite this shift in priority, the proposed design will keep 80% of the existing car parking capacity. 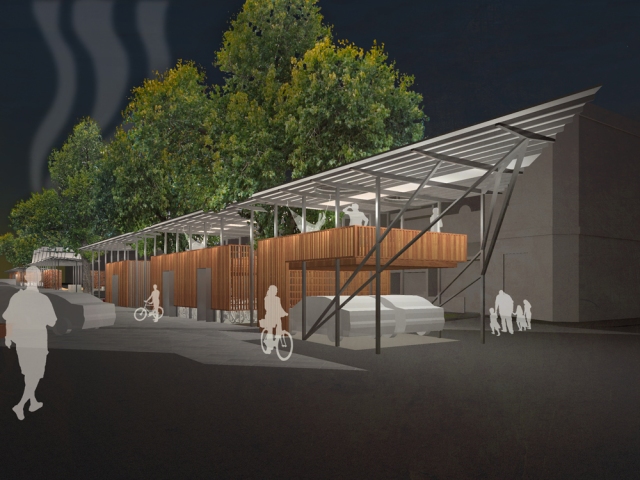 The second example of community driven architecture is the recent Better East West Link Design project undertaken by Atelier Red + Black. This project began with a group of local residents who were alarmed by the threat to one of Melbourne’s most significant park. The combination of a very poor reference design, a consultation process that did not give the community any say and political intransigence led the group to explore alternative designs as a harm minimisation strategy.

The most remarkable thing about the Safety Net For Royal Park was the amazing work undertaken by an unfunded community group.  The Safety Net group comprised people with diverse expertise from engineering to economics and public health.  These people managed to produce a feasible and prudent road design that has enormous advantages over the government’s destructive version of the project. The alternative location saves Royal Park from being turned into a quarry but as the design developed it also had other flow on benefits. Community infrastructure such as the Elderly Chinese Residents home in Parkville and the brand new seeing eye dogs facility in Kensington would be saved along with 55 homes.  The quality of this better design is due, in large part, to an iterative and responsive design process. Credit must also go in particular to the convener of the SNRP, Anthony Peyton, who put in an incredible amount of time and expertise on the project.

Despite having a remarkable understanding of the technical design issues, such as relevant safety standards and feasible construction techniques, the community group still faced an uphill battle in achieving credibility with key stakeholders in the project. The group met with all three of the construction companies tendering for the project. Initially they were reluctant and dismissive, however as they attempted to shoot down the alternative design they became aware of the level of thought and technical knowledge applied to the design. It remains to be seen if any of these tenderers will have the bravery to put forward this design alternative within their tenders.

The next step for the community group was to prove how the alternative design through the Arden Macaulay precinct could be integrated with the environment surrounding the tunnel portal. It is important to note that at this point that the Linking Melbourne Authority’s reference design has yet to prove it can achieve an acceptable urban design outcome around its tunnel portal in Royal Park.

In order to enrich this project with urban design and strengthen its credibility to the authorities and wider community, Atelier Red + Black took on this very important project on a pro bono basis. From this partnership several important outcomes ensued. Firstly the design was modified and enhanced. Environmental restoration and improvements to the Moonee Ponds Creek were incorporated. Heritage elements within the Arden Macaulay precinct were protected and enhanced. New community facilities including a school, community centre and sporting facilities were added. The inclusion of this community infrastructure could then enable the sensitive revitalisation of the precinct and support an increase in density. The ultimate result is a net benefit to the Arden Macaulay precinct despite the inclusion of the portal tunnel.

The second important outcome of Atelier Red + Black’s involvement was the ability to represent the design on an equal footing to that of the well resourced Linking Melbourne Authority. The technically competent yet community led design could be explained with animations and rendered perspectives rather than only lines on a map.

The lessons from these two pro-bono projects are important for both the design community and governments alike. For emerging design practices it is incredibly fulfilling to work for community groups that would otherwise be powerless to create change. It would be even better if there were government grants available to fund community led design proposals such as these so that the quality of architecture and built environment was not reliant upon an architect’s ability to work for free.

The other lesson for governments and local authorities is that the built environment is first and foremost for the benefit of people. The community must be involved meaningfully and openly from the earliest stages in a project. It is also important that the design is allowed to evolve as a direct response to this consultation. Anything less and we are giving up on our democratic values and risking the future quality of our cities.