Kerstin Thompson is one of Australia’s most respect architects. Her practice Kerstin Thompson Architects was established in 1994 and has delivered architectural excellence across a broad spectrum of project types from education projects, police stations and commercial fit outs, as well as multi-residential and single bespoke homes. Recently Michael Smith and Sonia Sarangi sat down for an in depth conversation with Kerstin to discuss the built environment, form making and the relentless negotiation required to create excellent architecture. 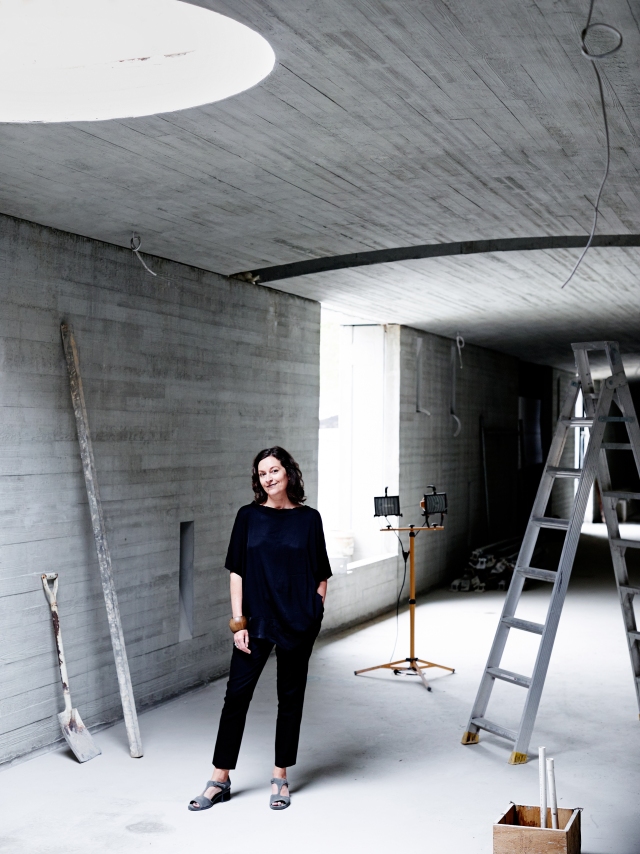 Michael Smith: As one of Melbourne’s leading architects, how do you evaluate the development of our city? What do you think we’re doing well and where do we need to lift our game?

Kerstin Thompson: I often bang on about how housing matters because most construction activity is housing. If you get housing wrong you’re buggering up your city. In my teaching in Wellington, but also in my practice here, I often lead research around higher density forms of housing. Recently one of my thesis students did an interim presentation to an academic from Newcastle University on the topic and his comment was “it’s so unusual seeing thesis projects on housing. In Newcastle we think it’s too hard so we don’t encourage students to tackle it.” I thought what a failure not to ask students to think about a substantial part of the city’s formation.

KT: It is. I’m always surprised that housing is seen as a prosaic topic in universities, that it’s not viewed as a place for innovation and good thinking. I think we’re realizing that Melbourne, despite priding itself on its architectural cultural, is missing the mark in terms of housing quality. This crisis is reflected in the design of minimum standards but it’s 10 years too late. That said, any turnaround is something.

MS: That leads directly into my second question, which is exactly on those draft apartment standards. Are they a good result or a missed opportunity?

KT: They’re a good start. Minimum size always alarms me because I do think there are cases where size is not the determinant of a living space’s quality or public realm benefit. When I brought a group of students over from Wellington earlier this year we went on a   housing tour that took in Cairo Apartments – a classic case of where very small spaces can have an incredibly high level of amenity because of their relationship to garden or to outside. I know that’s a low density version compared to high rise but there are many cases to be made for small that’s well designed and meets a whole lot of other liveability criteria.

What I’m not sure about is how much needs to be discretionary or mandatory. I think you’ve always got to allow for alternatives and exceptions. By way of example, we’re currently doing a project in a suburb in the inner north that’s involved an interesting negotiation around the relationship of the development to a boundary setback. The local council has been ahead of the curve in developing its own apartment design code. The challenge for us was a section of the code pertaining to varied setbacks depending on a spatial use (bedroom, living room) and the height of the building (how many storeys). Essentially if you had blank walls and relied on borrowed light from other rooms it was a lot easier to meet the code than incorporating windows and having to adjust your setback. It was a classic case where you know potential quality is being lost if the code is followed. We thought it was more generous to have a 3-metre setback because every apartment in the scheme has a double aspect and maximum cross flow ventilation. That was a fundamental principle that directed all of the massing across the site. We weren’t reliant on this rear setback, it’s only secondary, but we know it’s better for those apartments and we also think it had some benefits for the future development of the adjoining side.

Council has obviously adopted the code for a reason but then you begin to see its unintended consequences. So begins a larger discussion around discretionary aspects and being able to espouse the merits of an alternative. That’s probably one of our big hurdles, that a level of expertise and resourcing is required within council to review individual designs. You can see why it doesn’t happen, but it’s only through challenging these codes that we find new ways of doing things.

We had a case, again I’m trying to be concrete, a few years ago with a site in Fitzroy which has a 2-storey heritage base. We felt that if we put the new building in line above that the development – compared to the usual wedding cake setbacks – would be more appropriate to the morphology of Fitzroy. Also, that a perimeter block development provided better internal amenity for the development because you could do dual aspect. Even though it defied all the usual heritage defaults of setbacks from the historic façade, we pushed really hard and eventually got council support.

So it becomes a question of constantly challenging the default and approaching projects from first principles, which sometimes means high risk because you are saying to your client I actually think questioning this will get a better outcome but it’s a less predictable process that we might have to go through. That’s the scary part because it’s on your head if it doesn’t work.

MS: So to summarize your position, the apartment standards are good but they can’t be definitive. We need to have people who understand the issues to be able to provide exceptions to the rules, where appropriate.

“Housing always has to have a level of mutual benefit for its situation.”

That’s another little test you apply. Yes it’s good for the development but as long as it’s not jeopardizing or offsetting a problem from your site onto someone else’s site.

MS: One of the biggest changes globally that we have seen in the last few years in architecture is the rise of parametric design. Do you see this as a style in itself similar to say art deco, or is it more simply a tool that some architects will use to explore complex forms?

KT: I think it’s really interesting. Recently I went to the talk at the Boyd Foundation by Darren Anderson, who wrote the book Imaginary Cities. His talk was about future visions and they necessarily tell you more about the present out of which they came. Also that future visions tend towards this idea of tabula rasa. That they’re often presented without any understanding or concession to the existing layer of stuff that will be there. They’re strangely outside of time. Anyway, the point in relation to your question was he showed many future visions for Melbourne and he dug up all of these extraordinary schemes. Some of which I’d seen before but others were really new to me. One of them was from the 70s that was a scheme done on the Jolimont Railway.

Sonia Sarangi: Yes, those are some really crazy schemes.

KT: The wildest form making. Except for the fact that it was rendered through hand, it was a hand drawing. It looked like the sorts of projects I’ve seen recently coming out of RMIT’s parametric studios. I found it fascinating. Partly because there were these direct formal parallels using an old technology and a new technology. It’s interesting in that it tells you it’s not necessarily the tool that’s determining the forms. He also showed Mendelsohn’s Einstein Tower and you see this formal interest from early in the 20th century through to this one in the 70s in Melbourne. It’s interesting where there’s a formal intent and you just pick your tool to get to that.

The extent to which the tool can enable a new formal intent, that is something I’ve seen in the more innovative parametric studies, and again at RMIT, the thesis work there with Roland Snooks and his students. I think the possibility of these self-proliferating formal processes is really interesting. Revit, for example, which is more for the purposes of documentation and procurement benefits is not necessarily for a formal end. Why is that? Possibly because formally it doesn’t help our language or our architecture.

I will say that a long, long time ago, ’97 when we did an early project for RMIT, it was a technology estate project. It was a twisted form we were attempting to develop, which was to do with solar orientation on this curve site, et cetera. I remember having to go and find one of my old students to help me model it because with my auto CAD skills it was never going to happen. That was a nice moment where I completely understood this need for another tool to generate a 3D model.

SS: Do you ever worry that it might plant the seed for a certain kind of … I don’t want to use the world laziness.

KT: Absolutely. But it’s a complex one because on the one hand a lot of discussion in architecture is not necessarily to do with form making, and I do think that there are high risks when it’s the number 1 priority because it can result in an excess and wilfulness that I associate with problematic buildings. I know that on the one hand we fight form as a key driver or manifestation of architectural thinking. On the other I also realize that if we think of what we do as architects it is about making a physical space out of matter, and inevitably that is a creation of form.

I also recognize that some of our buildings have been identified for a clarity of form making. It’s not that they’re anti-form either, which I know some people will try to argue. I still think we always have this problem with form, but it is that extent to which it is a square peg/round hole problem. I think that’s when I question it, and how you find a form. I tried to describe this in a recent talk on ethics at the Robin Boyd Foundation in relation to the idea of accommodation.

To accommodate sounds like whatever comes in as a force within the making of a project you just take on board unquestioningly. It’s not saying that. It’s saying that all projects have various forces on them and our job, I think, is to accommodate those but through an intent of sorts. You are still doing something with these forces that is directed somehow. It’s not just whatever. I think that’s where bad architecture has an intent that is divorced from the forces it has to navigate and it just has determination to apply those regardless of whether it’s the right thing or not. That was partly where I was getting into an ethics of architecture that you have to wrestle with these considerations, it’s our duty to do that. Also for a disciplinary contribution you’re trying to wrestle and doing something with those that achieves something of integrity especially.